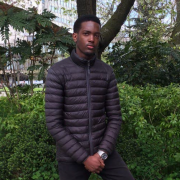 Keith Lizinde is a 21 year old Pan Africanist who…

What is self-sustaining? Self-sustaining is the ability to continue in a healthy state without outside assistance. A Self-Sustaining Africa is an Africa that is self-sufficient and relies on our resources and institutions rather than depending on western countries/China.

A self-sustaining Africa is an Africa that is a dream of one day where we as Africans can enjoy the fruits of our labour and resources, which will lead to our development in key areas such as education, economics, politics, and health. We have been programmed and brainwashed into believing that a self-sustainable Africa is not possible without western influences and help but that is far from the truth and western countries and China are opposed to an idea of a self-sustaining Africa as this would end their exploitation of our resources and us as a people.

We believe, as Africans, that the success of Africa is dependent on the west or China, but that is far from the truth because depending on the west or China hinders us and puts us in a subservient position. We saw this in the COVID -19 outbreak and how it had a massive impact on the world economy and this impacted African countries economies much worse than any other country. This was because we were dependent on other countries economically through foreign aid, grants, or loans.

We can also look closely at the very idea that aid aims to reduce poverty which is incorrect and deceiving to the African people. Instead, it is an important function of Western imperialism. In the majority of cases, the actual function of publicized aid from Western governments and their agencies, including the World Bank and the IMF, is to subsidize and facilitate the operations of the corporations and banks of the West.

Aid was, and is, therefore used by governments and big aid agencies to ensure that the governments that receive the money adopt policies that favor not necessarily capitalism itself, but the interests of the foreign corporations and banks, in particular, those that target less developed countries they have yet to adequately entrench themselves in. These institutions demand privatization to sell off the public assets of the recipient countries cheaply to foreigners (often after a significant devaluation of the local currency resulting from debt defaults), the removal of controls on imports, and the export of capital.

These aims mean that the aid agencies support only pro-Western and often repressive governments, some of them the product of US-supported military coups, while patriotic and sovereign governments who try to protect and develop their industries and improve the well-being of their people are vilified by the Western mainstream media and become the target of uprisings, coups and invasions planned and organized by the West. We need to understand the ramifications of not building towards a self-sustaining Africa and the biggest issues of not creating a self-sustainable model that can work for Africans and benefit us whilst also protecting us from western countries and China specifically.

We need to understand as African people the role that foreign aid plays in hindering our development as a continent. Since many African countries do not have enough resources to fund their development, they have to rely on foreign aid. While some aid is in the form of grants, the bulk comes in the form of loans. This has escalated the external debt burdens of African countries, with high service obligations that have denied the execution of important projects and programs.

Aid to Africa has never matched the continent’s needs. Moreover, aid does not always go where development demand would naturally draw it. Aid may not even be correlated with human development, the way that it is expected to. A respected Congolese human rights activist called Kambale Musavuli spoke on how western countries dictate or suggest to the Congolese government to use the foreign aid money on the mining sector (specifically the eastern part of Congo). This goes on to show you how foreign aid is not even given to African countries primarily to improve African countries and improving African lives, but rather strengthen western neo colonialism.

As you can see, Africans must understand the neo-colonial agenda that western countries have in place to pursue our resources, lands, and people. We can see a very interesting and critical perspective from Mark Langan who wrote an article called ‘Let’s talk about Neo-colonialism in Africa.

Mark Langan is quoted here saying “As defined by Kwame Nkrumah – the first president of an independent Ghana – the concept of neo-colonialism warns us of the potential regressive impact of unregulated forms of aid, trade and foreign direct investment in relation to poverty reduction and wellbeing in African countries. The concept underscores how African state sovereignties can be reduced to mere “flag independence” by external policy interference and economic control. It does not deny that African elites may engage in wrongdoing – whether corruption, nepotism or human rights abuses. On the contrary, it asks us to acknowledge – and contextualize – instances of mal-governance in terms of how external donors and companies often enable (and encourage) such actions to preserve lucrative economic arrangements.

Notably here, Nkrumah’s key text – Neo-colonialism: The Last Stage of Imperialism – was published in 1965. It provoked immediate political reaction from the USA at the height of the Cold War. Less than a year after it was released, President Nkrumah was overthrown in a military coup abetted by Washington.”

We see how he incorporates Kwame Nkrumah, who was one of the first leaders in Africa speaking about how Neo-colonialism would come into play once we are ‘independent’ and how it will destroy African progress. This all leads to my underlying point that the west seeks to stop Africa from ever being self sustainable. Self sustainability is a sin within the ideology of white supremacy, which uses neocolonialism  to exploit, abuse, brutalize, and kill Africans. Not only is self sustainability key to economic development in Africa but it is also a way to protect us from Europe, USA, Chinese, and Arab imperialism. Africa has never been able to protect itself from outside forces, because we are dependent on the same people who are exploiting and brutalizing us. Like Marcus Garvey said, “you cannot depend upon another race to free you, that is a basic law of human existence” in order for us to enjoy and maintain our freedom we have to be self sustainable and that is paramount for the next generation of young African leaders.

It has been argued that, for African countries’ economies to successfully transition from their current state of commodity-dominated production, to high value-added, job-creation production, the continent must design and implement strategies to harness large amounts of resources efficiently. One such opportunity that is grossly underutilized is engagement of the large African diaspora. This demonstrates the potential that a collaboration between diaspora and continental Africans can result in the building of a productive and self sustainable model for the continent of Africa.

We can see examples of how this could work in the words of Dr Sabelo Gumedze who stated that “It has also been suggested that Africa could learn lessons from other emerging and developing countries that have successfully engaged their diasporas for economic and social development. The example of Malaysia’s TalentCorp, a partnership between the government, the private sector and the overseas diaspora – works to bring educated and highly skilled Malaysians living and working abroad back to the country.”

To finish off my point on how important a self sustainable Africa is, we see how our most influential and greatest leaders were murdered before they could even implement their self-sustainable models within their countries. Leaders like Patrice Lumumba, Kwame Nkrumah, Samora Machel, etc., these leaders struck fear into western countries with their ideas, because the idea of a self sustainable Africa crushes Neocolonialism and exploitation of our resources and people.

In truth, the existence of a strong, united and truly independent Africa was a thing of terror to the countries with imperialist inclinations towards the continent of Africa whose aim was the continued subjugation and exploitation of the continent and people of Africa. This is one of the reasons why they did everything they could to sabotage the idea of a true independence, destroying infrastructure and seeding puppet leaders in countries to ensure their continued control of these lands, for their own benefit. This is one of the reasons why they continue to sabotage every single attempt by Africans and genuine African leaders to establish for themselves and the people of Africa an environment in which the continent can thrive and grow in a manner that would ensure it was actually the economic giant that it can be.

To end on a positive note, we see how Burkina Faso (in a 4-year span) became a self-sustainable country under Thomas Sankara due to him cutting foreign aid and loans and making sure Burkina Faso relied on its resources and people. That 4-year span of development and progress is evidence and proof that we can be self-sustainable and succeed at the highest level as a continent and this is my dream and life goal for my people and continent.

Keith Lizinde is a 21 year old Pan Africanist who is fighting for a self sustaining Africa that can operate and function on her own. “I believe making Africa self sustainable is a key fight for us as young people and most importantly the next generation.” He says.

THE CALL TO MY ANCESTORS

LETTER FROM AN AFRIKAN IN THE DIASPORA