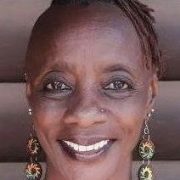 Mention that you live in a mud house to African urbanites, and you will get incredulous looks that can be interpreted to mean ‘how archaic’ or ‘you poor thing’ as people silently imagine your dark cold hut, tucked away somewhere in the African slums or rural environs. Until they find out that this home, you have built out of earth and twigs using African traditional architecture, lies in an affluent suburb in Africa.

Today, many Africans are living in big cities in houses or apartments made of stone or cement.  In more remote areas of Africa, people live in homes made of thatch and dried mud or in mud houses with corrugated iron sheets roofs, with no modern conveniences.

Sadly, this long thread of indigenous African knowledge of earth building is at risk of getting lost, as it is increasingly rejected in favor of bricks and concrete as many Africans slowly lose the rich African history of building using earth.

I set out to build my first earthen house in 2006, right in the middle of a well-to-do suburb in Kenya. As the houses were going up, there was no end of curiosity. Neighbors and some friends, I could see them ‘thinking’ I had finally lost it. One friend came over with a newly married young couple, and as I engaged in conversation with the couple, I mentioned that I was planning on building more mud houses. The new bride piped up indignantly, “I could never live in a mud house’.

The mud house raised a lot of curiosity and soon became an educational site, where children from nearby schools came to learn about their African heritage. Not many children had ever been inside an earthen house, nor had they ever experienced the joy of playing with mud or grass outside.

From the questions the children asked, I realized that they had a lot of misconceptions about anything made of earth, especially as a home, and those living in these kinds of environments. There was an air of earthen houses being equal to poverty and primitiveness, and stone houses being equal to wealth and the 21st century lifestyle.

Children’s attitudes are very telling of the things they hear from their adult role models, and spending time with them was an eye opener. It made me wonder just how many parents exposed their children to the rich traditional architecture of our African ancestors.

The History of Building with Earth

Throughout the history of Africa, Africans have had their own rich, historical, and cultural precedent architectural traditions of building with earth. In some cases, broader styles can be identified, such as the Sahelian architecture of an area of West Africa.

Because of its versatility and widespread availability, traditional African architecture uses a wide range of materials, especially earth, being the oldest building materials on the planet. The first freestanding human dwellings may have been built of mud and twigs. One finds structures in thatch, stick/wood, mud, mud-brick, rammed earth, and stone, with the preference for materials varying by region. North Africa for stone and rammed earth, Horn of Africa for dry stone and mortar, West Africa for mud/adobe, Central Africa for thatch/wood and more perishable materials, Southeast and Southern Africa for stone and thatch/wood, and Eastern Africa for earth and twigs and mud brick.

Earth building can potentially offer all the comfort, durability and aesthetic requirements sought in conventional construction, but with much higher ecological and social value. Though it may sound primitive, it’s not.  Building with earth is a venerable world tradition dating back to at least 4,000 years, with the oldest surviving specimens found in the Middle East and South America, and ending up today in places like Britain, France, USA, Peru, Iran, Iraq, Morocco, and Mali.

The advantages of using earth as a building material are numerous. Earthen houses are:

•Cost-effective: Assuming the earth comes from on-site and is of adequate composition, building with earth and twigs or earth bricks, costs virtually nothing to make (excluding labor), making it affordable to the wider population than masonry bricks and cement.  Earth buildings don’t need to be framed out in timber or reinforced with steel. Thus, they require less additional financial input in their construction.

•Accessible:  Because suitable earth can also be found in 80% of places, it is a highly accessible and inclusive building material—particularly in rural areas.

•Adaptable: Earth and twigs or earth bricks can easily be adapted to locally-specific contexts.  They can be shaped and sized to meet different building designs, plastered (or not) and finished in myriad ways to achieve a high level of aesthetics and durability.  There is a great scope to the creative ways that earth brick can be incorporated into building projects.

•Low embodied energy: As a building material, earth bricks have a very low embodied energy because they don’t require energy-intensive processing and don’t need to be transported long distances.  No gas or electricity is needed to make earth houses, which rely instead on energy from the sun. Earth is a renewable natural resource, and its use in construction reduces the extraction of non-renewable resources.

•Safe: Unlike many industrial building materials, mud bricks don’t contain any chemicals or hazardous materials that are potentially harmful to builders, inhabitants, and the environment.

•Owner built: The idea of using the sweat equity (labor) of the end-user of the building, to reduce costs is not new. Generally, up to 50% of the building costs can be saved by owner building even when using conventional materials. The degree to which savings can be made is dependent on the skill of the owner builder and/or the degree of skill needed for particular building materials or techniques. Choosing materials and techniques particularly suited to the owner builder (i.e. easy to use or learn to use) will increase the amount of money saved. The amount of cost savings can also be increased by careful selection of low cost materials, which can be made or collected by the owner builder.

•Solar design: It is generally accepted today that housing designed with good thermal performance, includes the basic concepts of passive solar design.  One of the basic principles of passive solar design is the use of wall materials of high thermal mass in order to mediate the extremes of temperature.  These high thermal mass materials include burnt brick, concrete, stone, and earth, often referred to as masonry.

Earthen houses are structures that use techniques that have been utilized for generations. It is an Africa architecture that is both sustainable and beautiful.

Unfortunately, a myth exists that African house building architecture is sub-standard, temporary or for the poor. Part of the reason why these negative perspectives exist is people’s lack of knowledge of these structures.

As Africans, let us strive to proudly reclaim the rich African traditional house building techniques of using earth, in building creative, affordable and sustainable environmental friendly homes, and those that can be absorbed into the mainstream housing market.

There are many benefits of retaining traditional African architecture that can be tailored to the 21st Century lifestyle. Let us ensure these traditional house building methods are recorded for future generations.