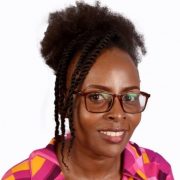 Naomi is a writer and a much sought-after Swahili tutor…

Growing up in East Africa, specifically in Kenya, Swahili, or Kiswahili as we call it, was introduced to most of us concurrently with a mother tongue. As much as most of us are not native Swahili speakers, we have practically spoken the language since birth. As it happens, some take this beautiful language for granted, thinking that it makes you inferior. They have a mistaken view that the more fluent you are in English (or whichever post-colonial language one speaks), the more educated and sophisticated you look. A moment of silence for them. Do not be sad though, this is a happy article. Good news on the way.

Schools all over Africa went to the extent of punishing errant students, ‘errant’ because they spoke in Swahili or their mother tongue. ‘Errant’ because they used the language of their heart to express themselves – how saddening. The punishments varied but were all so demeaning. A student would be forced to wear a dirty sack or hang a badge around their necks written ‘I spoke vernacular’ until they found another student speaking in the vernacular and handed over the item of punishment. That was sad, but the narrative is changing.

I’m happy to report that positive developments have taken place with regard to African languages. Nowadays, these are the kinds of headlines you see, “16 southern African countries in the Southern African Development Community (SADC) have agreed to adopt Kiswahili as a formal language in the region.” Countries such as South Africa, Botswana and Rwanda are introducing Swahili to their school curricula.

Swahili is our language of the heart, the one we dream in and form ideas in before we transpose them to other languages. The African Union understood this and adopted Kiswahili as a continental language. Imagine the very gifted African athletes responding to international reporters in Kiswahili when being interviewed. Visualize Africa having its version of IELTS, and people wishing to study or live in Africa having to learn the language and pass the test. We are allowed to dream; they say all dreams are valid.

Kiswahili is the tie that binds Africa, and it brings a host of benefits with it.

Strengthened social ties: How do you feel when a stranger speaks to you in your language? It warms the heart, and you are immediately drawn to that person. Social cohesion – that is what Swahili will do for Africans, make them feel like a big family; the political boundaries will not mean anything. Who even put the boundaries there in the first place?

Economic growth: Have you ever heard of the tower of Babel? Funny story it is. The builders started well; they all spoke the same language. Then the Supreme Being confused them, and they all began to speak different languages because what they were doing was against his will. Their ambitious venture to erect the highest building ever came to a dead end. They could not understand each other. A common language is crucial to a people’s economic growth, and that is what Kiswahili accomplishes for Africa.

Enhanced intellectual capacity: Psychologists say that people who speak more than one language have enhanced concentration, improved memory, problem-solving and critical-thinking skills, multi-tasking ability, and better listening skills. The average African speaks at least three languages: a native language, a regional lingua franca and a colonial language. Now add Swahili to those who do not have it already. Do you see how Swahili makes Africa a cognitive powerhouse?

If this article resonates with you, and you would like to start learning to speak Kiswahili, then I’d recommend the LEARN KISWAHILI 202 website where I have a well-structured course for business and family learning. We help you to speak with confidence in weeks!

Naomi is a writer and a much sought-after Swahili tutor who loves helping students of all ages and enjoys the challenge and reward of hearing them speak Swahili with confidence.

The Lie of Evolution and the Destruction of Humanity