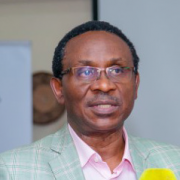 Dr. Peter Mokaya is the Director/CEO of Organic Consumers Alliance,…

(Published with permission from an article by Dr Mokaya originally published on the Organic Consumers Alliance website in June, 2020)

Good people, the month of June 2020 is here, with us, and with it an unprecedented manifestation of the “convergence of toxicity” which has devastating consequences on the immune system. One may quip, really? What do genetically modified organisms, glyphosate (popularly called Roundup Weedkiller or Glyphosate Based Herbicides-GBH), Vaccines , 5G and COVID-19 have in common?”
In this article, we outline the various “toxins” that constitute the “convergence of toxicity”. Let us start with GMOs. What are genetically modified organisms (GMOs) and what do they have in common with Covid19? For starters, both GMOs and Covid19 are genetically modified organisms. There is evidence that Covid19 is a “novel” virus, meaning it is not natural but rather “modified” through man-made interventions in scientific laboratories. Have a read: https://www.sciencedirect.com/science/article/pii/S0166354220300528

GMO foods are foods that are produced from seeds which “mimic” natural seeds but are “modified” in laboratories to express certain specific desired traits referred to as “events” which would not normally occur in nature, without the “tinkering” process in labs. A well published safety concern about GMOs foods is that they manifest allergenic and immunogenic side effects which, in general, cause dysfunction of the immune system. Here, a review: https://www.researchgate.net/publication/23457039_Health_Risks_of_Genetically_Modified_Foods
Glyphosate aka “Roundup” aka glyphosate based herbicides (GBH) is a synthetic laboratory created synthetic chemical that mimics the naturally occurring amino acid, glycine. It is water soluble which makes it an insidious “poison” that, thanks to Monsanto and now Bayer, is almost everywhere on earth; from inside our bodies(we are 70% water) and the surface of the earth(which is 70% water bodies). Among the myriad of negative impacts of glyphosate (or its various formulations which contain adjuvants and additives which are even more toxic), it negatively affects the immune system in much the same way as Covid19 does: Here: https://www.ncbi.nlm.nih.gov/pmc/articles/PMC4756530/

Vaccines: Vaccines, from an epidemiological context, are touted as the “saviors” of human kind throughout history. While their lifesaving benefits are acknowledged, increasingly, there is a “dark side” to the more recent vaccines, from a safety point of view. It appears, deliberately, some manufacturers, have thrown caution to the wind and allow impurities including, dead foetal cells, thimerosal(mercury) and aluminum, as some of the contaminants which adversely affect the immune system. Here the evidence: https://www.ncbi.nlm.nih.gov/books/NBK220494/

Fifth Generation (5G); Fifth Generation(5G) electromagnetic frequency, despite a concerted cover up scheme by the telecommunication industry, 5G seems to have serious negative public health effects which include a direct effects on the immune system. Emerging scientific evidence, from independent and credible scientists, like Prof. Martin Pall, of Washington University, suggest serious harm to human health, including the immunological system. https://www.emfsa.co.za/videos/dr-martin-pall-to-the-nih-the-5g-rollout-is-absolutely-insane/ A interesting finding of epidemiological importance is that some of those negative effects seem to “mimic” the effects caused by Covid19. Here, some video evidence of the effects of 5G: https://www.brighteon.com/da127bf4-2f0c-424d-8dbe-3911c96e5cda/

Based on the above explanations and supportive evidence, one can now join the dots and notice a pattern emerging – showing how these multiple environmental agents, re: GMOs, Glyphosate(or GBH), Vaccines and 5G, singularly and collectively, negatively impact the immune system, hence the term “convergence of toxicity”. Needless to state, Covid19, is apparently a chimeric virus, which disrupts the immune system and causes immunological dysfunction which triggers a “cytokine storm” in the lungs, which is often the cause of respiratory suffocation and death. Emerging evidence suggests that these negative immunological effects are made worse (they work synergistically) or compounded by these other environmental triggers. The collective assault and damage to the immune system is what GMOs, Glyphosate, Vaccines, 5G and Covid19 have in common.

What is the way forward to avert weakening of the immune system during the Covid19 pandemic?
In view of the outlined “Convergence of toxicity” the solutions recommended include the following:
• Stop or significantly reduce exposure to transgenic foods and related products.
• Reduce use of all synthetic pesticides and GBH in agricultural practice, including desiccation.
• Minimize vaccinations especially from the newer and unsafe vaccines like the “flu” vaccines.
• Avoid or minimize exposure to all WiFi and other electromagnetic radiation aka “electro-pollution” radiations in the range of 4G(60GHz range) and including the 5G(60GHz or 5millimeter range) currently being rolled out in many countries, all over the world.
• Promote safe and natural non-chemical farming which includes agro-ecological farming and related regenerative farming and related food and nutrition systems.
• Strengthen and boost the innate natural immune system by promoting the consumption of healthy agro-ecologically grown foods which are marketed as organic foods.
• Create evidence based policy advocacy and population based awareness creation on the link between GMOs, GBH, Vaccines, 5G and Covid19 and the urgent need to minimize exposure to the “convergence of toxicity” which, collectively pose an existential threat to humanity.
• Leverage the current Covid19 pandemic to advocate for safer food production and consumption systems that strengthen the immune system which in turn, reduces the incidence and prevalence of non-communicable diseases: These include obesity, diabetes, hypertension, chronic obstructive pulmonary disease (CoPD) and various cancers which increase vulnerability to Covid19 infection and progression to disease and in some cases, death.
• Advocate for a systems approach to Covid19 mitigation including the need to place food and nutrition security at the heart of mitigating the negative impacts of Covid19.
• Dr. Peter Mokaya, the author of this article, is quoted advocating for “the need to view Covid19 beyond the lenses of the health sector” in this recent article. http://impacthubmedia.com/13609/agriculture-should-be-at-the-core-of-covid-19-response/

IS MAN GUILTY OF SOLVING THE WRONG

NOTE FROM AN AFRIKAN IN THE DIASPORA