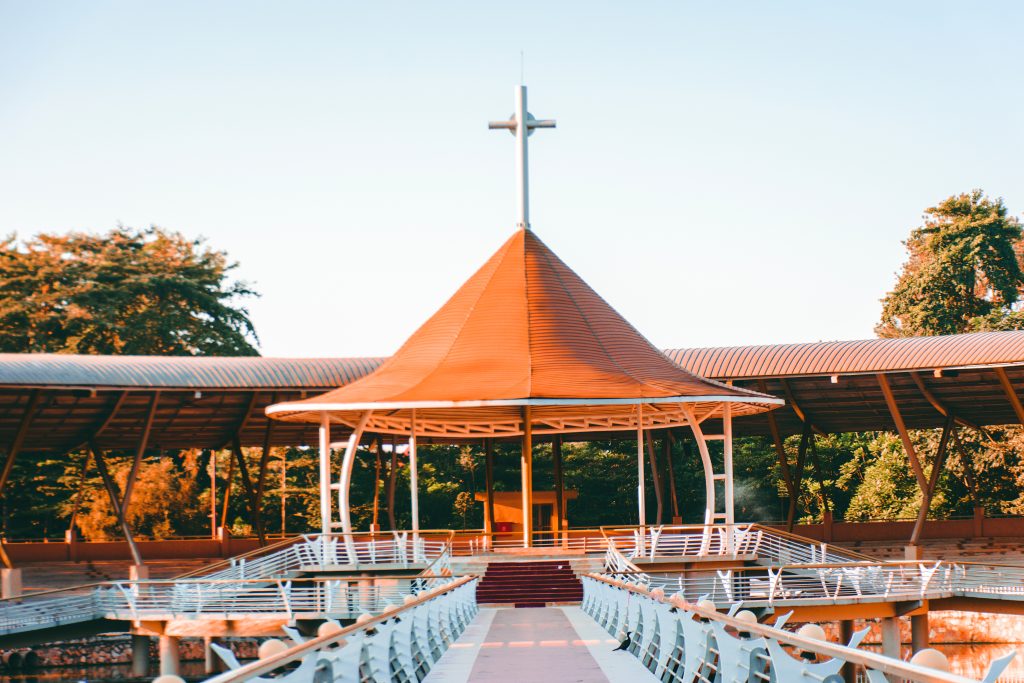 In 2018 my husband and I took a bus trip from Nairobi to Kampala. It was a God-ordained journey and our stay was to be just over a week. A few nights at a lovely Airbnb in Kyaliwajjala was where we kicked off our visit, followed by another few nights a short distance away in Namugongo (literally across one road and down another).

We planned, we booked, we traveled, not knowing that one of the most significant religious commemorations was to take place a short distance from our Airbnb.

We arrived mid-afternoon and we took note of a police blockade and a growing number of people in the area. Travelers with bags, settling by the side of the road. Food sellers setting up shop. The whole area was abuzz with activity.

Our host, Mary, explained to us that there was going to be a mass the following day, June 3rd, at the Namugongo Martyrs’ Catholic Shrine which was just a stones throw away from us. We later found out that those who were arriving were on an annual literal pilgrimmage from all across Uganda and other parts of Africa and the world, to commemorate the lives of those killed for their beliefs. I sorted of nodded because I thought I understood.

Morning brought with it clarity… much greater. There were masses of people. Hundreds of thousands had come for this one event. The President of Uganda included. The whole area was completely packed. The noise levels were way up. Boda Bodas (motorcycle taxis) had tripled their fares… and they were not sorry. The roads were full of people and motorbikes and cars and minivans and buses. There was singing and chanting and praying as television and radio sets trumpeted live broadcasts of the proceedings at the shrine.

Our host suggested that we go over there to witness for ourselves. We quietly took ourselves in the opposite direction.

Evening came and, while most of the people had left, many of the out of towners were settling down for another night or waiting for their buses, jerry cans of ‘special water’ from the pool of water in hand. Pilgrimmage over.

We did a little research and waited a few days and then, from our new location, we walked over to the Shrine one evening. The roads still bearing the evidence of the large numbers of people who had visited the area. We got access to the Shrine, walked around a little, took some photos, asked some questions. It was quiet now. Calmer. 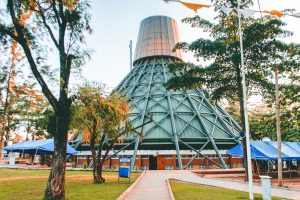 This is the story as we have come to understand it so far:

In June of 1886, 45 males, Christians (Anglican and Catholic), serving in the court of Kabaka (king) Mwanga the Second of the Buganda people, stood up bravely for their faith in Jesus Christ and, in direct defiance of the King, refused to renounce their beliefs and return to the traditional way of life. They were converts to Christianity by the labors of some missionaries who were staying at the Kabaka’s court.

As a result of their determination to stand up for what they believed, they 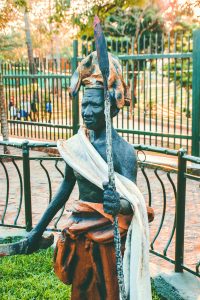 were burnt to death at Namugongo, where those of the royal household were put to death. Some suggest that its name comes from the Luganda word, Omugongo, because people killed there would be dragged on their backs (omugongo = back).

It is believed that many others were martyred at the hands of Mwanga II. Based on accounts, the Buganda king, was threatened by the King of kings (Jesus) Who seemed to have usurped all his power, authority and control in his court, causing people to defy him. An unheard of offense!

The pool of water at the Shrine is called Mukajjanga Well and was named after the chief executioner. This water is considered to be blessed or holy and there are even claims that people who have come into contact with it have been healed or their marriages restored. Folklore has it that the pool was formed from the ash and vapour from the burning of the martyrs, or formed mysteriously when they were killed, becasue of their purity. Fact-lore states that bricklayers dug it to get water for making bricks and that it was later expanded and modified after the construction of the Basilica. 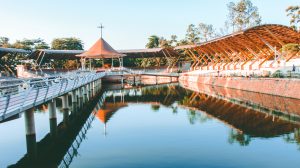 The pilgrims who track their way to the Shrine each year, come seeking healing through prayers and the water from the well and soil from the site. Searching for miracles.

While we were there and in the days following, as we continued to ponder the mystery of the Namugongo Martyrs, we began to realize something.

All the martyrs had paid the ultimate price for what they had believed. They walked exactly according to Revelations 12:11 “… they did not love their lives to the death.” And “by the word of their testimony” they overcame everything, for the cause of Christ. This is the story of Namugongo. The beauty in choosing Jesus over self, over others, over what appears to be safety, at whatever cost.

It’s not a story about healing water from the ground, or some religious act of pilgrimage but rather the healing Water of the Spirit of God, based on a choice to die for Him that He may be honoured and glorified.

By their choice, they entered into the realms that Stephen, the first disciple to be martyred had access to, and for such people, God is not ashamed to be called their God, for He had prepare a place for them in eternity. A sight beyond physical sight, that empowered them to choose wisely to build the unseen.

How many of those who come there yearly, seeking for a life shift, understand the life shift that is staring them in the face. At every crypt honoring one martyr or another, a statement is being made – ‘for Jesus, I did this’. And indictment goes out against anyone who would walk these grounds… ‘would you?’ 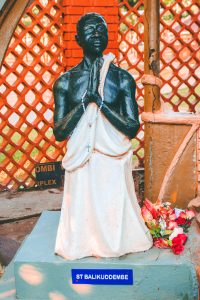 Namugongo took on a special shine for us after that moment. A place to come to reflect on the willingness to die for Christ or risk everything for Christ. And if one is not opportuned to visit this place, the story must at least give a context of what the lives of the disciples of Christ looked like and how the words of Jesus to them about carrying their cross was clearly illustrated in their willingness to give it all for Him without regards for their lives. It is also a special reminder that Africa as both a continent and a people destined for a grand purpose in God are not some form of tourist attraction, or a biased picture of poverty and corruption but a clear picture of lives lived in awe of God and in submission to His will even when it costs blood of sacrifice on the stones of the ages.

White Slave Traders were Investors Too