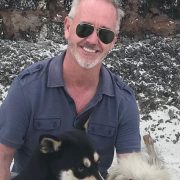 David M. Jones is a counselor and lecturer at Africa…

In this quiet, bright sunlit blue sky afternoon while working from home, I’m sitting in the partial shade of an old growth Yellow Fever tree as it allows a few comforting rays of sunlight to pass through its high and outstretched branches. The air is clean and is being pushed along by gentle fresh breeze. Beyond the garden outside of the low fence, I can hear the distinct sound of bells ringing as they hang from the necks of the cows, sheep and goats that are quietly grazing along through the foliage of the wildlife corridor under the ever watchful eyes and diligent care of their Maasai herdsman. Since the Yellow fever tree and the other trees in the garden are home to a variety of birds such as Weavers, African Paradise Fly Catchers, tiny little Red Cheeked Cordon Bleu and several other species, the atmosphere is filled with unique calls and songs as they flitter about calling out to one another. From my perspective this is a lovely place to spend the afternoon working.

Just a few short kilometers away, when I need to do some small shopping at the local street side markets, my perspective changes quite drastically, but it is the same town where I find the scene described above. It is where an infamous transport stage can be found and where matatu madness reigns supreme, producing its hectic scene and chaotic atmosphere obliterating any semblance of peace and tranquility. It is where tuktuks, bodabodas and donkey carts all converge with matatus along with the general commuter traffic of cars, lorries and pedestrians. The atmosphere is permeated with the very loud noises of revving diesel engines blowing dark exhaust into the air; by dozens of touts wearing maroon uniforms competing aggressively with one another, yelling and attempting to direct passengers onto their particular buses and vans. On top of this, most of the matatus are blaring bone rattling “trap base” music while incessantly leaning on their obnoxious hooters.

These two very different perspectives of the same town just so happen to belong to me. But I know that these perspectives and viewpoints are not shared, with most of the town’s population. For instance, most young people would likely find the garden scene and atmosphere exceptionally boring and devoid of any “real” entertainment value at all, while the junction stage scene is full of action, music and desired human interaction. Likewise, a business person would have little use for the garden as the customers and transportation needs are found in the busy areas of town. Additionally travelers/commuters that need fast and cheap transportation, seek out the modes described above. So do I have the right to judge, criticize, and look on those who do not share my perspective with disdain?

Another example of varying perspectives is the story of the five blind men who encounter an elephant. It’s an old folk tale from India about different viewpoints than our own. Through the sense of touch, five blind men attempt to conceptualize and learn what an elephant is like. As you can imagine, each came up with a very different description as one described the trunk, another the tail, the others the legs, ears and tusks. Even though each account was accurate, their descriptions varied greatly to the point of disagreement concerning what an elephant must be.

Where am I going with this?

In an attempt to live a more peaceful and harmonious life as I walk this journey, I am learning to be more accepting of the differences between myself and others. As humans suffering from the human condition of being imperfect, somehow in an attempt to justify and protect ourselves we tend to build walls of distinction and prejudice against those who don’t exactly think, believe and act as we do. Subsequently finding ourselves only accepting and associating with like-minded people.We can call it tribalism, which extends beyond what we think of tribalism here in Africa in the form of race, color, traditions and beliefs systems, even amongst Christian denominations. In the US for instance, from small towns to large cities, you will find anywhere from a few to a few dozen of Christian church denominations who differ quite a bit in terms of what they believe to be the true Christian doctrine. The results often being separatist behavior, and in the extreme, active and practiced discrimination.

Policing with a Right Heart

This is not new information, I realize, but it’s easy and mysteriously natural for us humans when it comes to dealing with one another, in our community, church, circle of friends, and even in our own families, to subconsciously gravitate to the side of negativity and judgment of others. Mainly because of differences of perspective. In reality, this way of thinking and behaving not only affects our outward relationships, but it is certainly a detriment to our own holistic, spiritual, mental and physical well being. By psychologically and spiritually shifting our thinking to acceptance, inclusivity, understanding, forgiveness and love, or just simply agreeing to disagree – we can displace the negativity of bitterness, disdain, and judgment that we may hold for others who don’t exactly share our culture or beliefs. Like forgiveness, this is a gift to ourselves that actively fosters a spirit and energy of positivity that those around us will ultimately benefit from as well. Imagine not having to feel like we are in the judgment seat or the subject of judgment. What a liberating way to live and relate to others, that produces an atmosphere of grace and peace. By practicing non-judgment, grace, forgiveness, and ultimately love, our perspective organically changes to one that harbors, nurtures then exudes positivity and displaces negativity.

I encourage you to give it a try, even when the very atmosphere you find yourself in challenges you.

Sometimes, and unfortunately, the most often shared Bible stories are the ones that are most easily glossed over without much consideration. Jesus Christ is our ultimate example on how to treat others. So please allow me to encourage you to read again, the parable of “The Good Samaritan” (Luke 10: 25-37), and the story “The Woman at the Well” (John 4:4-28). Both are about accepting, nurturing and forgiving those, who in these stories, were the most discriminated and disregarded people of those times within the Jewish culture. Christ demonstrated a superior way to live, but unfortunately it doesn’t come naturally to us; we must intentionally practice His teaching, not just hear them or preach them.

Policing with a Right Heart

Men, Communicating for Me Alone