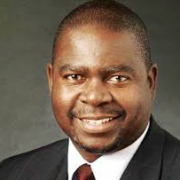 Douglas Mboweni is the current Chief Executive Officer of Econet…

Fr. Anselm Adodo and Prof. Ronnie Lessem address, in this powerful work, a central question of our world today.  What is the kind of framework that will work to establish a sustainable balance in our frightfully fragmented world?  There is no doubt one of the significant lessons that history has taught us is that life, at its fundamental definition, has become intolerable to a self-destructive individualistic perspective of life. The created order was brought into existence on the concept of interdependence, that no-one is an island, and any attempt to redefine it in any other way is not sustainable. For example, Adam Smith’s idea of economic growth was based on what he called rational self-interest (I want to call it individualism) in a free-market economy.  His view was that the ‘invisible hand’ of the free market would transform the individual’s pursuit of gain in a way that leads to the maximization of the interests of society. However, what we have seen in today’s world is that society has continued to painfully witness the glaring divide between the rich few and the poor masses accompanied by a deterioration of social and moral considerations. The world over, therefore, there is an unstoppable yearning for a sustainable system that promotes the social and moral purpose along with clean value creation. This is where, I believe, the best of the African cultural heritage and sustainable practices need to be revealed, showcased, and harnessed towards the common good of humankind. Adodo and Lessem proffer an answer with their worlds-wide dimensional framework with a focus on Afrikology which emphasizes integral virtues around an authentic human being who has vital spiritual, relational, communal, and environmental elements.

I have known Fr. Anselm Adodo and Prof. Ronnie Lessem for over three years and have been exposed to their tremendously encouraging worlds-wide dimensional thinking and work.  Their perspective on the transformation of individuals, entities and societies has had a significant impact on my own perspective and work at the individual, village and corporate levels without diluting my deep spiritual grounding.  I am a citizen of Joseph village under Chief Negari in the Mwenezi District of Masvingo Province, Zimbabwe.  At the village level, I am using the worlds-wide dimensional perspective to uplift Joseph village to be a local and global player without losing its local grounding. For me, Joseph village, with a sad history of perpetual dependence on donations from the Government and non-governmental organizations (NGOs), represents the stark irony often found on the African landscape. Here is a village endowed with rich land, amazing natural resources, a clean atmosphere, and wonderful people and yet despite all these, poverty is written all over the village. Why?

The dependence on external donations accompanied by a strong infiltration of foreign value systems has led to the deterioration of the village’s own identity and culture. With the Afrikology approach, I see the opportunity to re-imagine Joseph village’s holistic life grounded in ubuntu theoretically, pedagogically, and practically. With the deep need for similar developments across the African continent, there is undoubtedly a clear case for the setting up of communiversity networks so as to proactively drive the Afrikological re-imagine agenda. In Zimbabwe, such work is progressing well, and I am determined to contribute to it.

Currently, I serve as the Chief Executive Officer of Econet Wireless Zimbabwe Limited, Zimbabwe’s largest telecommunications company listed on the Zimbabwe Stock Exchange.  Even at this corporate level, I am finding the worlds-wide dimensional view to be a very empowering framework for conducting business in a multicultural world. The business serves a diverse base of customers and not only does this framework accommodate and respect the business’s moral compass, but it also opens opportunities for tapping into the rich assets of rural Zimbabwe where over 65% of the population is housed. A customer in the rural setting can no longer be viewed simply as another number in a low-value customer database. Every individual is viewed as part of an interdependent network working to enhance value creation at all levels of the network. Respect and value of the individual as part of a bigger picture is critical. My business has a passion for re-imagining the rural as a sustainable way of developing the individual and society at large.

Lifting my eyes off my village, my business, my country and my continent, there is no doubt that we live in a world which is desperate for impactful and sustainable solutions, a world that has been let down by so many man-made systems, a world that has suffered immensely from the irresponsible actions of mankind.  Therefore, it is not a surprise that there are loud cries emanating from all the four ends of the globe, for an inspired way of thinking and doing things, for actionable thinking that functions in harmony with nature and culture whilst riding on the appropriate technologies to establish sustainable enterprises.  The future must be completely re-imagined and innovated in a holistic manner that embraces every individual’s dignity as an authentic human being, the preservation of every square inch of the globe and the equitable stewardship of every resource placed before mankind by the creator.

In their work, Adodo and Lessem, emphasize the need to consciously and actively recognize that communities, organizations, and societies grow and evolve interdependently, thereby releasing their GENE-ius.  What is this GENE-ius? The Gene-ius approach, as they articulate it, necessitates the need to be locally grounded in one’s natural environment (South), Emerging culturally and self-consciously (East), globally Navigate different fields of knowledge (North),  and ultimately globally-locally Effect both the local and global environment in a sustainable way (West).  Therefore, as it tries to understand and create knowledge epistemologically, the Afrikology GENE-ius is found by being Grounded in the  African South, Emerging both locally and globally, thereby drawing also on the East, North and West to Navigate and ultimately Effect the local and global environments.

Adodo and Lessem argue that such a process is essential for global integrity, which can only be reached when all the four worlds engage effectively whilst remaining anchored on their respective grounds.  This is particularly important in a multicultural environment as the dominance of one culture or the “One world fit all” approach creates an imbalanced world to the detriment of the peoples of the world.  Lessem in theory, and Adodo via Pax Herbals in Nigeria, also with Abouleish citing the renowned case of the Sekem Group restoring the Earth in Egypt, in practice, remind us that complementarianism and integration are fundamental aspects to holistic living as the best aspects of the various worlds are integrated without the loss of the local grounding of each world.

Therefore, this book by Adodo and Lessem is critical in a world where the voices from other worlds have drowned the African voice. As I have already mentioned, I am currently participating in initiatives so that the African voice is heard ‘Afrikologically’.

Lessem and Adodo’s work in this book is a valuable contribution to the sustainable, balanced future of our world.  The serious inequalities created by the North and West’s individualism can be solved by picking and integrating lessons from the Ubuntu (brotherhood) of the South, which recognizes that everyone’s humanity and welfare is ideally expressed in relation to that of others.  A person, therefore, depends on other people to be a person.  I hope you will be encouraged and challenged to think and act completely outside the box as you thoughtfully go through and reflect on this incredible work.

Douglas Mboweni is the current Chief Executive Officer of Econet Wireless Zimbabwe. He was the successor to Econet Founder, Strive Masiyiwa in March 2002 and has been at the company's helm since then. Douglas has more than 20 years of senior management experience in the Information Technology and Telecommunications industry. He was also part of the team that spearheaded Econet's entry into the international mobile markets, including in Botswana, and Nigeria, one of Africa's largest mobile markets. Since taking over, Mboweni has overseen the growth of the largest telecoms company in the country, and one of the largest companies by revenue and profit in Zimbabwe. This is a unique case in Africa, where the leading telecoms company is usually foreign-owned.

Book Review: God is a Woman

BOOK REVIEW: HOW TO SUCCEED AS AN ENTREPRENEUR IN AFRICA